St Patrick’s Day 2022 is a Christian festival celebrated around the globe with high fervour and excitement. With its roots traced back to the Irish culture, this day honors the great patron Saint. On this rejoiceful occasion, St. Patrick’s Day Parade is carried out in several parts of the world, and St. Patrick’s Day traditions are observed. The color “Green” is popularly worn on this day. Let’s know its history and interesting facts. 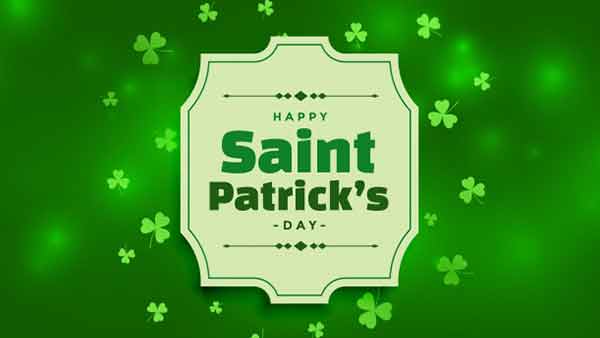 Who Was Saint Patrick?

According to Saint Patrick’s Day history, this day memorializes the death anniversary of the Christian missionary and patron saint, Saint Patrick. It is fondly believed that after his abduction at the age of 16, he was forced into slavery. When he emerged free from the chains of slavery, he came back to Ireland with an objective of converting Irish natives into Christians. He worked towards creating spiritual awareness and development and never seeked financial assistance when it came to religious activities. Till the time he was alive, he established several churches, monasteries and schools for the welfare of people.

St Patrick’s Day is observed as a public holiday in some parts of the UK, Canada, USA and Australia and celebrated among natives of the Irish descent. However, some countries like India do not observe this day as a public holiday but celebrate with equal vibe and enthusiasm. Hence, the offices and public dealing sectors remain functional, even though the opening or closing hours may vary.

Saint Patrick grew up as a native of Roman Britain, but was enslaved at a young age. After becoming a Christian, he worked as a missionary and enlightened people with the realms of Christianity. A famous 1588-born Franciscan scholar named Luke Wadding ensured that the death of St. Patrick must be honored, which is why it became a day of feasting. Also due to immigration, the significance of St. Patrick’s Day came into force. As per religious beliefs, it is believed that Saint Patrick ’drove off snakes’, with snakes being a symbol of evil forces and darkness. However, there are innumerable instances claiming the origin of St. Patrick’s Day, but the sentiments remain the same.

St Patrick’s Day celebrations are carried out in full force in major parts of the world. It is very common for people to adorn green-colored clothes on this day. House decorations are carried, where people install small statues of Leprechauns, green clover leaves and flags, and prepare themed baked goods and delicacies such as pies, brown breads etc. to be enjoyed with family and friends. Alcoholic beverages are largely consumed in many countries on this day, and kids gorge on sweets and cookies. Irish delicacies such as Irish Coffee, Poundies, Stews and Potato Soups are consumed all over the world and loved by people. Various people pay their respect to the great Saint Patrick by visiting St. Patrick’s Purgatory.

A Three-Leaved Shamrock is known to be the most common symbol of St Patrick’s Day. It was St. Patrick himself who used this three-leaved plant to explain the Holy Trinity to the masses. People customarily wear green-colored clothes and accessories to mark the occasion and carry out St. Patrick’s Day parades. Some of the common religious St. Patrick’s Day symbols include serpents, the Celtic cross, leprechauns with green-colored attires, harps and much more.

Below are some interesting St. Patrick’s Day facts to enlighten your knowledge:

1.What is St Patrick’s Day?

St Patrick’s Day is a Christian festival celebrated around the globe with high fervour and excitement. This day honors the great patron saint, St. Patrick.

2. What is the traditional food served for St Patrick’s Day?

3. Is it offensive to wear orange on St Patrick Day?