Christmas Eve 2022 falls one day before Christmas, and is said to be a massive festive occasion worldwide. The general Christmas Eve date falls on 24th December 2022 according to the Gregorian Calendar, and is a widely-observed Christian festival commemorating cultural union and soaked in pure beliefs. People organize get-togethers, parties, and reunions, attend Church services, Midnight Masses and sing carols, whereas kids prepare themselves for the Legendary Santa Claus. Christmas Trees are decorated with lights and bulbs, and gifts are exchanged on this occasion. 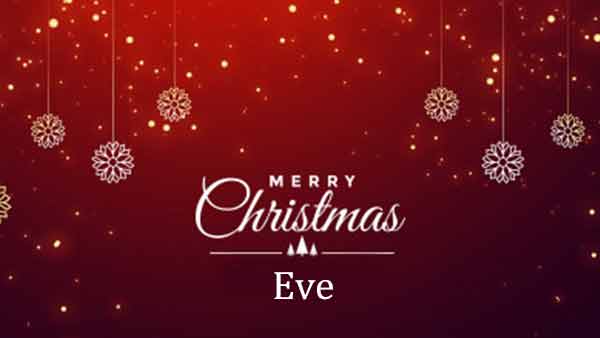 Is Christmas Eve A Public Holiday?

Christmas Eve is considered an optional public holiday in several countries such as the USA, Australia etc., but there are some countries like India, the UK & Canada that do not consider this day as a public holiday. As a result, several public dealing offices such as banks, shops, offices and institutions and schools either remain closed or alter their timings accordingly. On the contrary, shopping stores remain open late on this day since it is Christmas Eve and a flock of people arrive to hop and buy Christmas decorations and gifts. Some academic institutions and universities organize dates and events on this day, and conduct plays based on the birth of Jesus.

Christmas Eve history holds relevant significance and commemorates the beginning of its observance. Christmas Eve is associated with the holy birth of Jesus Christ and is observed by both Western and Eastern Churches as per their beliefs. Below we have described how customs and observances on Christmas Eve differ accordingly.

Roman Catholics and Anglicans carry out Midnight Mass before or at midnight to commemorate the birth of Jesus. With this, children can be seen singing Christmas Carols, trees are decorated, and a nativity scene with Joseph, Mary and infant Jesus is depicted outside the churches. This is a very common practice around the globe whose roots can be traced back to old times. Lutherans carry out traditional celebrations by hosting choirs, candlelight services and musicals, making Christmas Eve one of the major highlights. Methodists commemorate this day by celebrating the Holy Communion with their loved ones. The ambience remains solemn and dim-lighted.

Paramony is the another name given to Christmas Eve as per the Byzantine Rite traditions. It is believed to be the day when Nativity Fast is concluded, which is why a day of strict fasting is observed by the Byzantine Christians. In some cultures, any kind of food is prohibited for consumption until the first star is visible in the evening. Biblical celebrations are carried out, during which verses from the Old Testament are recited, after which a new candle is lit at the centre of the Church and hymns such as Kontakion and Troparion of the Feast are sung. Byzantine services for Christmas Eve are somewhat similar to that of Good Friday.

Christmas Eve is celebrated differently by people all around the world. Since some countries observe this day as a working day, offices and schools remain open but the timings may get altered. It is very common for the stores to remain open on Christmas Eve since this occasion sees major economic rise throughout the world due to extended shopping and purchases. Houses are decorated with lights, Mistletoe, bulbs, Christmas trees, Reindeers and much more. Family meals are organized, since this occasion is all about uniting people and making merriment with the ones you love and adore.
Christmas carols and jingles are sung by kids and even adults, and choirs and sermons are recited in the Churches to summon the birth of Jesus Christ. It is a tradition in many countries to hang stockings or red-colored socks near the chimney or window since the kids hope for Santa Claus to arrive and fill them up with gifts, sweets or nuts. In many countries, displays are held, or plays are conducted at the Churches depicting the Nativity night. Every country or religious sect has its own traditions and beliefs when it comes to celebrating the birth of Jesus. Special Church Masses and Vespers are held for the commoners.
In modern times, parties are also organised for friends and loved ones to get together. Gifts are exchanged, and people wish for happiness, prosperity and good health-wealth.

It was customary to use the color “Green” for decorations during the festivals since the Pagan times. Some of the major symbols were Mistletoe, Holly and Ivy. However, it was announced by the church authorities after some discussion that this tradition must be followed during all Christian festivals. Ivy and Holly represent Evil and Good, whereas Mistletoe signifies fertility, love and vitality. Apart from that, Santa Claus along with reindeers is a famous Christmas symbol and its images or pictures are used for decorative purposes. Snowmen, candy canes, Christmas star and images of Baby Jesus are religiously significant and seen as a symbol of purity and love.

Here are some interesting facts about Christmas Eve below. Read about them and learn how this festival evolved:

Along with the above mentioned, there are innumerable Christmas Eve facts that will blow your mind. We wish you make the best of the occasion and visit your local churches on Christmas Eve with your loved ones.

1. Why do we celebrate Christmas Eve?

2. Is Christmas Eve the whole day?

Christmas Eve is the evening or entire day before Christmas Day, the festival commemorating the birth of Jesus.

3. What is the traditional Christmas Eve meal?

We Hope That This Article On Christmas Eve Was Enlightening You! Thank You For Remaining Connected With Us!!