Winter Solstice 2021 in the Northern Hemisphere will be on 21 December 2021, Tuesday. The winter solstice 2021 will mark the longest night of the year in the northern hemisphere. Known as the winter solstice, this is the time that darkness takes up as much time as it can, before gradually giving way to the growing daylight of spring. But the winter solstice has a lot more to it than you may know. Astrological occurrences in which one cycle finishes and another starts are essential solstices. 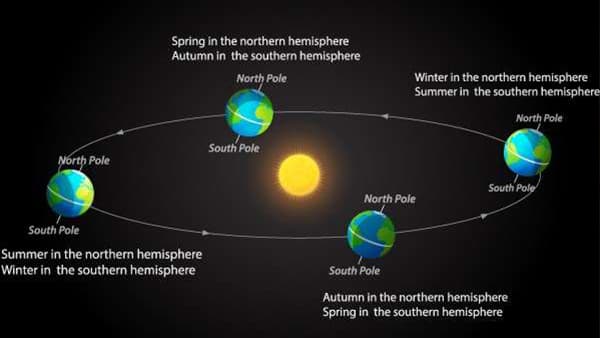 Winter Solstice As Per Astronomy

Earth is placed in its orbit at the December solstice, so that the sun remains below the horizon of the North Pole. The sun shines directly overhead at noon, as seen from 23 1/2 degrees south of the equator, on the imaginary line encircling the globe known as the Tropic of Capricorn. As far south as the sun ever gets, this is. At the December solstice, all areas south of the equator have day lengths of more than 12 hours. Both areas north of the equator, meanwhile, have a daily length of less than 12 hours.

When the winter solstice in 2021, just like every year, will happen in the Northern Hemisphere, the North Pole is tilted about 23.4° (23°27′) away from the Sun. Because the Sun’s rays are shifted in the same direction southward from the Equator, the vertical noon rays pass directly overhead at the Tropic of Capricorn (23°27′ S). Six months later, the South Pole is angled away from the Sun by about 23.4°. In the Southern Hemisphere, on this day of the winter solstice, the Sun’s vertical overhead rays reach their northernmost point, the Tropic of Cancer (23°27′ N). Because the Earth does not orbit upright but is tilted 23 1/2 degrees on its axis, the Northern and Southern Hemispheres alternate in receiving the sun’s light and warmth. Winter and summer are determined by the tilt of the Earth, not our distance from the sun.

How Does Winter Solstice In 2021 Affect Astrology?

The winter solstice 2021 , which will take place on 21 December this year can mark the longest night of the year but literally and figuratively, it also means that light is on the way. Taking into account the astronomical meaning of it and the fact that astrological forecasts suggest it may be actually the worst day of the year, you may be wondering whether it is linked to the winter solstice and the zodiac, and whether this extra-short day will affect your individual sign as we thankfully close the last year and move into a brand-new year.

Given the very existence of the solstice, it is easy to assume that the solstice would have a major influence on the signs, meaning the sun is already moving over the Tropic of Capricorn. However, while the winter solstice coincides with major astrological activities, it does not necessarily have a direct influence on the zodiac. That doesn’t say, however, that it’s entirely meaningless to or that you should ignore astrology.

The existence of the solstice does not affect the zodiac itself but the fact that the sun will make the ultra-rare dual change of moving into Capricorn and lining up with Saturn during the solstice will affect the signs.

Effect Of Winter Solstice On The World

If we approach it from a metaphysical viewpoint, the Winter Solstice is about celebrating the rebirth of creation. The days start to get a little longer from this point, and the sun starts to shine brighter. This, therefore, symbolises confidence, hope, and positivity. Astrological effects may be produced by any geological phenomenon. And thus the Winter Solstice, as per astrology, has an enormous impact on human life.

1. Does the solstice affect every zodiac?

Yes, the effect is more psychological on each zodiac.

2. Does the Winter Solstice fall on the same day every year?

No, the dates keep changing. December 21 or 22 solstices happen more often than December 20 and 23 solstices. The last December 23 solstice was in 1903 and will not happen again until 2303. A December 20 solstice has occurred very rarely, with the next one in the year 2080.

3. Why is the winter solstice called the darkest day of the year?

Well there are both astrological and geographical reasons. To explain in astrological terms, the solstice marks when the sun will be moving into the "steady" Earth sign Capricorn, it indicates a good time for reflection.

We hope that you have liked our article on Winter Solstice 2021 and found the details informative. Thank you for being an important part of AstroSage.