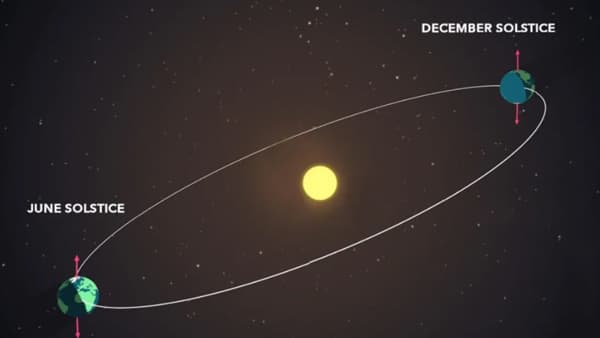 The term "solstice" comes from the Latin solstitium, from sol (Sun) and stitium (still or stopped), indicating the fact that on the solstice, as seen from Earth, the Sun tends to stop moving" in the sky as it reaches its northern or southernmost point for the year.

Summer Solstice or June Solstice 2021 occurs on Monday June 21 at 09:01 a.m. IST. This date officially marks the start of summer in the Northern Hemisphere, occurring when Earth reaches the point in its orbit where the North Pole is at its most angled toward the Sun, resulting in the calendar year’s longest day and shortest night. The term "longest day" refers to the lengthiest period of daylight. The Northern Hemisphere receives sunlight at its most direct angle of the year during the June solstice.

The June solstice, also known as the summer solstice, occurs in the Northern Hemisphere when the Sun reaches its peak and northernmost point in the sky. In the northern half of the globe, it signals the start of summer. In comparison, the Southern Hemisphere’s June solstice is when the Sun is at its lowest point in the sky, marking the beginning of winter.

The Sun seems to change course and head back in the opposite direction after the solstice. The motion referred to here is the apparent direction of the Sun, for example at local noon, as one sees its location in the sky at the same time per day. Its course forms a sort of flattened figure eight, called an analemma, over the year. The Sun itself does not, of course, move. Instead the tilt of the Planet’s axis as it orbits the Sun, as well as the Earth’s elliptical, rather than circular orbit, creates this shift in place in the sky that we see on Earth.

Tropical Dakshinayana is regarded as the Summer Solstice in Hindu astrology. Sidereal Dakshinayana, however, begins from Karka Sankranti - Asurakal begins from this day onwards, which is not good for beginning auspicious work.

Indeed the day with the longest duration of sunshine is the Summer Solstice. Note how at the solstice, the Sun is highest in the sky; its rays touch Earth at a more direct angle, causing the powerful warmth we call summer. Because on this day the Sun is highest in the sky, you will find that at noon your shadow is the shortest it will be all year long. When the Sun crosses the local meridian, the local noon is the peak for the day in the sky.

Does the Solstice Always Occur on the Same Day?

The June solstice is not determined by a specific calendar date or time; it is determined by the Sun’s northernmost point from the equator. As a result, the solstice will not always fall on the same day. At the moment, it alternates between June 20, 21, and 22.

1. Does the solstice bring early sunrise?

Although the day of the solstice has the most daylight hours of the year, the earliest sunrises of the year occur before the summer solstice. The exact timing will depend in part on your latitude: In the mid-latitudes of the Northern Hemisphere, it occurs about a week earlier than the June solstice. The reason for the timing of sunrises is related to the inclination of the Earth’s rotational axis and Earth’s elliptical (rather than circular) orbit.

2. Does the Sun set slowly on the solstice?

3. Is there a relation between summer solstice and the winter solstice?

We hope that you have liked our article on Summer Solstice 2021 and found the details informative. Thank you for being an important part of AstroSage.