The Queen‘s Birthday 2021 is considered as a public holiday and an eventful occasion in numerous Commonwealth countries, and commemorates the birthday of the Monarch. However, this date doesn‘t correspond to the official birth date of the Queen. The Queen‘s Birthday date falls around May-end or June‘s beginning in accordance with each country. Parades, gun salutes and processions are carried on this occasion, and official celebrations are organized to mark the Queen‘s Birthday. 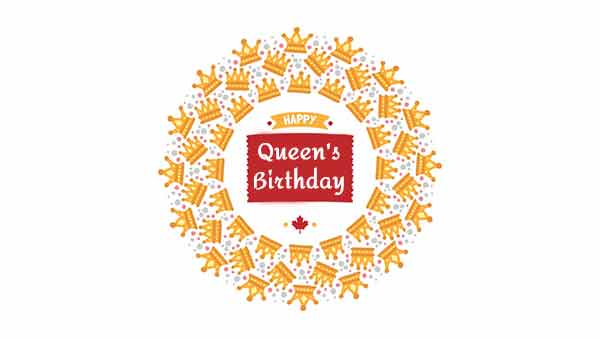 Why Does The Queen Have Two Birthdays?

As we all know, Her Majesty The Queen celebrates two birthdays in a year, i.e. the official one on April 21 and second on the second Saturday during the month of June. Now, what is the history behind this? This tradition began in 1748, when King George II was born during the spine-chilling winters in November. Since he didn‘t want his subjects to catch any illness due to heavy cold weather, he decided to shift the birthday festivities on the Trooping the Colour Day.
Since then, his successors have celebrated their birthdays twice in a year. On this occasion, the members of the Royal Family visit the Queen to be a part of the spectacular ceremony. A grand parade is known to be carried outside the Queen‘s residence, Buckingham Palace along with brave aerial shows. In other parts of the world, events and processions are carried out commemorating the occasion of the Queen‘s Birthday.

Significance Of Celebrating The Queen‘s Birthday

It is a worldwide known fact that The Queen is a powerful figure in the political, social and economic realms and enjoys a great authority over Commonwealth countries as well as the UK. According to various sources, it has been defined that Her Majesty The Queen holds the ultimate power to appoint or dismiss ministers or the Prime Minister, dissolve the Parliament, command the armed forces for a war or peace, regulate a political treaty, create peers, pass or discard any bill in the Parliament and much more.

It is the Queen herself who represents the nation‘s unity and dignity, and enjoys innumerable privileges, thereby making her a powerful figure all over the world. All of these facts shed light on the prominence of the Queen‘s presence and answer the very question about why the Queen‘s birthday is celebrated.

Queen‘s Birthday is a national occasion and observed with equal festivity and fanfare. This day is marked as one of the biggest days in the UK, and observed as a public holiday. Apart from the UK, this day is widely observed in several other countries such as Australia, Canada and much more. On this occasion, banks, public dealing sectors, universities, schools, and business firms remain closed. Even the schedule for public transports are altered accordingly. However, countries like India and the USA do not consider this day as a public holiday, which is why they pay their respects and deliver their wishes to Her Majesty The Queen.

Queen‘s Birthday Celebrations Around The Globe

This occasion is celebrated differently all around the world. However, the Queen‘s Birthday is a major event in the United Kingdom, with a grand ceremony being organized and carried out. On this occasion, the Queen‘s Birthday Parade or Trooping The Colour Parade is carried out by the Commonwealth and British army regiments with numerous gun salutes in different parts of the country. In other countries, Football League matches are organized that draw a major crowd. A Birthday Honours list is released on this day in several parts of the world, which recognize the contributions of people. On this day, Her Majesty The Queen specially makes a public appearance on the balcony of her residence along with the members of her family and accepts the love and loyalty of her public.

These facts about the Queen aren‘t limited to the above mentioned, but there are several others that are equally intriguing and interesting to read.

1. Which Queen‘s birthday is the Queen‘s Birthday holiday?

The Queen‘s Birthday is a public holiday, celebrated on the second Monday of June in most states and territories.

Yes, the Queen‘s Birthday will become the King‘s Birthday.

3. Are shops closed on Queen‘s birthday?

The Queen‘s birthday is on Monday and you can find most smaller shops closed or working on reduced hours.

4. Why does the Queen wear 5 poppies?

We hope that you‘ve liked this article and found the necessary information you were looking for. We wish you all the best.