New Year’s Eve 2021 is said to be the largest ever global celebration worldwide and observed one day before the New Year’s Day. New Year’s Eve date falls on the 31st December every year and marks the end of the year as per the Gregorian Calendar. People do the very famous "Countdown" and carry out New Year’s Eve celebrations with great fervor and style. Apart from this, there are various other countries that follow Luni-Solar Calendars which cast New Year as well as New Year’s Eve date differently since the calculations may differ on the basis of the sightings of the Moon or Sun. On this day, people bid farewell to the ending year, prepare to welcome the upcoming year with open arms and organize festivities, get-togethers, fireworks and parties. 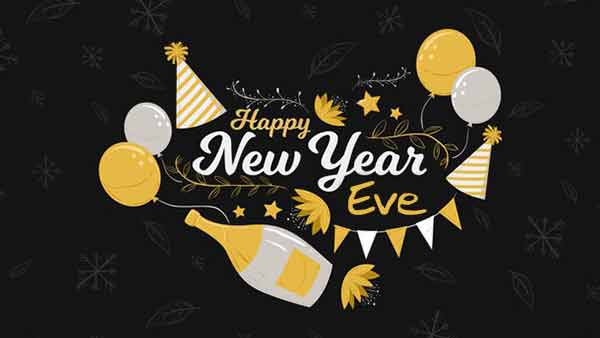 New Year’s Eve is not considered a public holiday in major parts of the world, including countries such as the United Kingdom, USA, Australia, Canada and much more. However, natives host major New Year’s Eve parties and celebratory events to commemorate this occasion. Therefore, several professional offices, sectors, institutions, schools, public sector headquarters and much more alter their closing and opening time, and public transport systems adjust as well. On the other hand, some countries such as India may mark this day as an optional holiday. Hence, banks, government offices, shops, universities etc. remain closed on this day.

New Year’s Eve history holds relevant significance and commemorates the beginning of its observance. New Year’s Eve celebrates the ending of the year and makes way for the New Year to enlighten the lives of people with new opportunities, chances, possibilities and challenges. People have mixed feelings on this day, since they are stepping up on the ladder of life. Some become nostalgic thinking about their lives in the past 12 months and events that took place.

The Gregorian Calendar was introduced in 1582 by Pope Gregory XIII, and adopted in some European countries. It was centuries later that the Calendar was taken into account and implied all over the world for a fair regulation. New Year’s Eve festivities go all the way back to the time when Christianity was not massively practiced in Europe. However, with the passage of time, Christianity came into prominence and all such festivals were induced with Christian beliefs.

Why To Celebrate New Year’s Eve?

There are multiple reasons that justify the celebrations taking place on New Year’s Eve all over the world. Why celebrate New Year’s Eve? Below are some reasons:

New Year’s Eve is a day of mass celebration all around the world. All night parties, fireworks, get-togethers, family reunions and much more are organized on this day.

Mouth-watering delicacies are prepared on New Year’s Eve, one day before the New Year’s Day. In some countries, parades are organised and carried out on a huge scale, and people exchange New Year wishes and gifts with their loved ones.

Some visit the churches and attend midnight church services on New Year’s Eve to offer their gratitude and appreciate the life the Lord has given to them. Youngsters, on this day, gather around various public places in numerous countries and become part of New Year celebrations and ceremonies. Some countries live telecast the celebrations on New Year’s Eve for the natives living around the world. In Year’s time, theme parties are very famous, where people dress up accordingly and New Year decorations are also customised as per the theme or concept. Some of the famous New Year party themes are formal masquerade ball theme, costume party, winter wonderland theme, roaring 60’s theme, glitter theme and much more.

Midnight countdown is famously carried out on the last minutes of New Year’s Eve, where people gather together and chant the countdown usually 10 seconds before the clock strikes 12. The last strike marks the end of the current year and commencement of the New Year. People hug each other, offer New Year wishes and greetings by saying “Happy New Year”, and cut the cake. In some countries, huge fireworks are carried out, and the commoners witness this beautiful sight together with their loved ones.

1. Which country has the best fireworks?

2. Can you celebrate New Year twice?

It is only possible to observe the New Year’s Eve twice by traveling eastwards across the International Date Line.

4. Why is January first the new year?

There is no astronomical justification on January 1 for celebrating New Year’s Day. New Year starts on January 1st, in the New Style or Gregorian calendar.

We wish you all a very happy New Year’s Eve!!