Holy Saturday 2021, according to the Catholic Liturgical Calendar, falls between Good Friday and Easter Sunday, and also goes by the name Good Saturday, Easter Eve and Saturday before Easter. This day commemorates the event when Jesus Christ died and was laid in his tomb, for which a vigil is carried out.

However, the very next day is Easter Sunday, when he resurrected from the dead. People do not necessarily fast on this day but attend the Easter Vigil Mass held at the church. Let’s move on and learn about this event and religious significance. 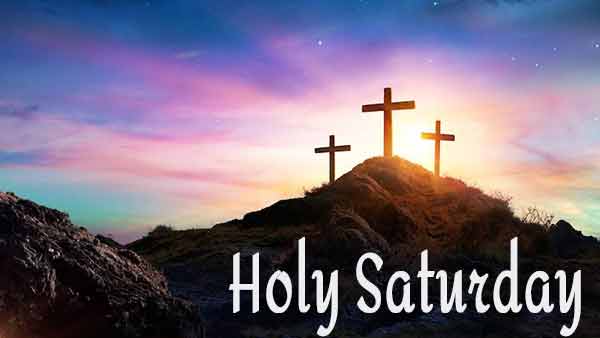 Is Holy Saturday A Public Holiday?

Holy Saturday is considered as an optional public holiday in several parts of the world, which includes Australia. However, it is not considered as an exclusive occasion in countries such as India, the UK, USA or Canada, and is said to be a working day mostly.

However, several religious sects of the society observe this day by carrying out prayer mass at the church and remember the sacrifice done by Lord Jesus Christ for the sake of humanity.

Holy Saturday history holds relevant significance and commemorates the beginning of its observance. Around the 2nd century CE, fasting for a duration of about 40 hours was carried out after Good Friday till the early morning of Easter Sunday. This was because during this period, the dead body of Jesus Christ was removed from the cross and laid down in the tomb.

In the 4th Century by Constantine’s realm, the Easter Vigil began during the nightfall on Saturday, where the Paschal Candle was lit. It was, and is still, believed that lighting the Paschal Candle is a significant ritual to follow on this day since it eliminates darkness and leads the lost souls into the light.

Holy Saturday in the Bible

As per biblical references, the followers of Jesus mourned the death of Jesus, and held a mass vigil outside the tomb where he was laid down after his death awaiting his resurrection. This act of burial has been accounted in the Mark 15:46–47, which goes,

"So Joseph bought some linen cloth, took down the body, wrapped it in the linen, and placed it in a tomb cut out of rock. Then he rolled a stone against the entrance of the tomb. Mary Magdalene and Mary the mother of Joseph saw where he was laid."

The canonical Bible shows no such reference directly about the holy vigil carried out by the followers and family of Jesus Christ. However, when Jesus left his mortal body, it is believed that he plunged into the Underworld or Hell and freed the righteous souls trapped into the burning fire since the beginning of this world.

This is why this day is also referred to as "The Harrowing of Hell ’’ by the Athanasian Creed and Apostles’ Creed’s authors. Below is the reference from Gospel of Nicodemus 19:11–12:

"Then the Lord stretching forth his hand, made the sign of the cross upon Adam, and upon all his saints. And taking hold of Adam by his right hand, he ascended from hell, and all the saints of God followed him."

What is Easter Vigil?

It is believed that the followers and family of Jesus Christ held a vigil while mourning his death and waiting for him to resurrect from the dead. This is also called the Easter Vigil. Further explained, Easter Vigil is usually held one day before Easter Sunday, where devotees and followers stay awake, sometimes fast, perform devotional exercises and patiently wait for the “comeback” of the Lord.

Several religious symbols represent the essence and vibe of Holy Saturday. One of the major ones is the Paschal Candle, which is said to lead the lost souls as well as living from darkness into the celebratory light of Vigil. It is a white candle with a cross and the symbol of Alpha-Omega marked on it, which represents the fact that Jesus Christ had, has and will always remain with humanity.

It is said that during the Holy Week every year, a new Paschal Candle is lit and used throughout the season. The color Violet or Purple is known to be the liturgical color for Holy Saturday. Christ’s Tomb and Mary Waiting by Christ’s Tomb also symbolize this event.

Holy Saturday Celebrations Around The Globe

Religious observances for Holy Saturday are carried out between Good Friday and Easter. Christians or the followers of Christianity remember this day as the source of both happiness and mourning, since the resurrection of Jesus was predicted after his death.

On this day, the natives participate in the Mass Vigil Service held at the local churches, where the meaning of the rituals, symbols and prayers are discussed. Also, communal baptism services are also carried out in several churches on this day.

With the end of the Mass of Glory, these effigies are lit on fire. On this day, children across the world decorate the Easter eggs and stack them up in a basket.

1. What do you eat on Holy Saturday?

Catholics can consume the meat of warm-blooded animals on Holy Saturday. However, it depends on your beliefs and observance.

2. Is there Catholic Mass on Holy Saturday?

Once a common day for baptism ceremonies, Holy Saturday is not considered a mass day until after sundown.

3. Can you work on Holy Saturday?

Many companies are observing daily opening hours in several countries. Holy Saturday is the day before the resurrection of Christ.

In the Protestant and Western Orthodox Churches, the season of Lent lasts from Ash Wednesday to Holy Saturday night. This estimate means that Lent lasts 46 days if 6 Sundays are included, but only 40 days if they are omitted.

We hope you have liked the article on “Holy Saturday” and found the information interesting to read. All the best for your future!