Good Friday 2022 is one of the most popular Christian holidays and known as Black Friday and Holy Friday. This day falls during the Holy Week on the Friday before Easter Sunday and commemorates Jesus Christ’s crucifixion on the cross. On this day, natives fast and perform church services to pay their respects, and refrain from any merrymaking such as dancing or parties. Get the answer to the question “what is Good Friday” and know the accurate meaning of Good Friday. 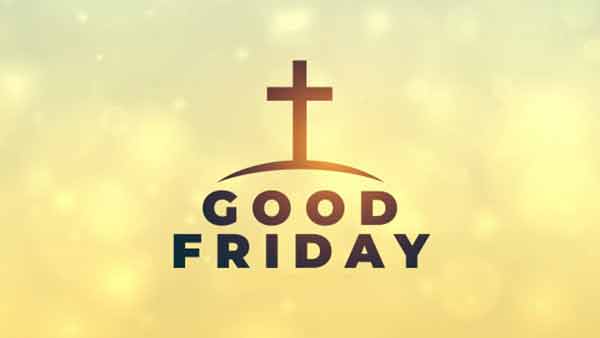 Is Good Friday A Public Holiday?

Good Friday is majorly considered a public holiday in several countries, including Australia, Canada, India and the United Kingdom and state holiday in some parts of the USA. Hence, schools, colleges, public dealing offices and stores remain closed on that day. On the other hand, since some countries do not observe it as a federal holiday, stores and offices remain functional.

Want to know what is Good Friday and the reason behind its observance? History claims a painful event that led to the origin of Good Friday. As per Gospels documents, one of Jesus’ disciples, Judas Iscariot, revealed the presence of Jesus Christ in return for 30 silver coins as a reward. After the arrest, Jesus was interrogated for several hours by many of the priests but none could get any satisfactory answers. Due to this dissatisfaction, Jesus Christ was condemned for sacrilege and sentenced to death. After he was presented in front of the Roman governor Pontius Pilate under fake charges, who failed to detect any crime or charges against him. Since the crowd demanded crucifixion, he told the crowd that Jesus was indeed innocent but handed him over out of the fear of riots.

With this, the walk, known as Stations of the Cross, started with Jesus holding the big cross and being accompanied by Simon of Cyrene. He was crucified and after the suffering lasted for six hours. When his soul left his mortal body, natural disasters followed. After his body was respectfully wrapped and placed in a tomb. It was after three days that he resurrected from the dead. Since then, the ritual of observing Good Friday has come into existence.

How Is Good Friday Observed??

Good Friday normally stirs an air of sadness, which is why people normally fast and perform prayers to commemorate the day when Jesus Christ was crucified and ascended into heaven. On this day, several churches hold service prayers up until midday or 3 PM to remember the duration when Jesus suffered and remained hung on the cross. The ritual of the Stations of the Cross is reenacted in several parts of the countries, where actors carry out a procession and depict the final hours of Jesus Christ’s life. In many countries, handmade kites are flown to symbolise Jesus Christ’s death and rise from the dead. Crucifixes, crosses, black cloths and coveralls and much more are some items that act as a symbol of Good Friday.

Why Is It Called Good Friday?

Ever wondered why this day is called Good Friday? Or exactly what is Good Friday? One of the theories suggest that Christian natives believed that the day marked the end of Jesus Christ’s sufferings, which led to his ascension to heaven and then resurrection. This day marks the end of mankind’s sufferings and sins and the arrival of Easter. It was on this day that Jesus Christ swallowed all the wrath from God and sacrificed himself in order to attain salvation and forgiveness for the greater mass. Without any bloodshed and crucifixion, God couldn’t justify the act, which is why it is called the greatest and holiest triumph.

Here are some of the interesting Good Friday facts you may not be aware of, which give you a quick insight about this solemn day.

1. What kind of holiday is Good Friday?

It’s not a U.S. federal holiday but in some states it’s a state holiday.

2. What do you eat on Good Friday?

3. What color are you supposed to wear on Good Friday?

Good Friday is a day of solemn and prayers. We hope that you have liked this article, and found the exact meaning of Good Friday and its origin