Easter Sunday 2021, also called Easter or Resurrection Sunday, is a Christian festival and commemorates the day when Jesus Christ resurrected from the Dead three days after his crucifixion, that followed with death. According to the New Testament, after Jesus Christ was crucified and buried in the tomb, he rose from the dead, and this day is known as Easter Sunday. The day is preceded by Lent, a period of penance and fasting. 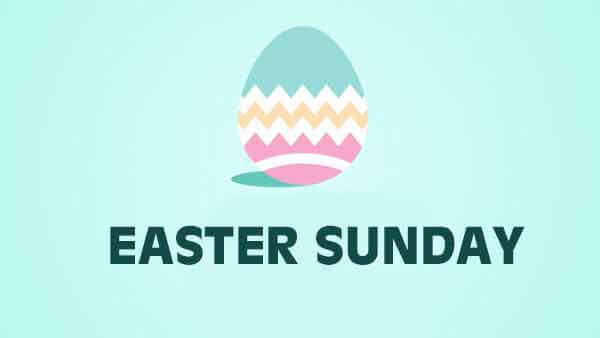 Is Easter A Holiday?

Easter Sunday normally occurs on Sunday, which is itself a non-working day all around the world. This day is widely observed in countries like the UK, Canada, Australia and USA as a religious occasion but not a public holiday. Hence, schools, colleges, universities, workplaces etc. remain closed on this day. However, academic institutions in several countries including India organize celebrations to mark the occurrence of Easter with Biblical plays, recitals, egg decorating contests and much more.

Easter Sunday history holds relevant significance and commemorates the beginning of its observance. The day of Easter marks the occasion when Jesus Christ rose from the dead and resurrected after being crucified. According to the New Testament, it is mentioned in the Gospel of John that Mary Magdalene, also known as Madeleine, visited the tomb where Jesus Christ was laid down after his death. It was when she reached there that she found that the tomb was empty, when an angel appeared before her and informed her of Jesus’ resurrection. Hence from this day, the observation of Easter came into light. Mary Magdalene was known to be one of the followers of Jesus Christ who witnessed his crucifixion, death, burial as well as resurrection.

However, Easter is said to have its roots in the Pagan celebrations, and the name is believed to be derived from Eostara, the Goddess of Rebirth. The early missionaries would organize the Feast of Eostara to celebrate the resurrection and revival of Mother Earth. Even with multiple historical sources of its origin, Easter Sunday marks the triumph of life over death and is celebrated by millions around the globe.

Numerous symbols and items symbolize the festivity of Easter. Below we are mentioning some of them:

The festival of Easter is celebrated according to Western and Eastern beliefs. We have given below a quick explanation about the religious observance and beliefs accordingly:
1. Western Christianity
In Western Christianity, Easter Sunday is celebrated differently by both Roman Catholics and Protestants. Among Roman Catholics, customary worship or liturgical observance begins on the eve of Easter Sunday, i.e. on Holy Saturday, followed by Easter Vigil. During the Vigil held, kids and adults are baptized, candles are lit and numerous readings from New and Old Testament are recited. On the other hand for Protestants, Easter Sunrise Services are carried out at the cemeteries or any open ground from where the sunrise can be witnessed. This service is held to commemorate various Biblical narratives in Gospels.
2. Eastern Christianity
Eastern Catholics follow the same liturgical customs and symbols on Easter Sunday. Preparations for Easter Sunday begins from Clean Monday, where devotees fast throughout the week until Easter Sunday. The Orthodox church service begins on Saturday, where Jewish traditions are followed. On this occasion, candles are lit at midnight signifying the resurrection of the Holy Jesus and a procession is carried out where natives move around the church to mark the three days when Jesus was laid in the tomb. This service continues till Sunday morning, and the fast ends with a feast.

Easter Sunday Celebrations Around The World

In countries highly populated with Christians, this day is marked as a day of festivity and celebration in regards to the resurrection of Jesus Christ. Therefore, special church services, processions, prayers and feasts are carried out after the period of Lent. Biblical plays and dramas are organized to portray the significance of this day and mark the importance of the sacrifice made by Christ for the sake of humanity. Traditional delicacies such as Capretto or Lamb, Pastries, Agnello or Goat, Babka or Cake, Mazurka or cakes full of nuts, honey and fruits are prepared in several regions.

Decorating eggs with food colors and preparing chocolate eggs and eggs in the shape of Easter Bunny is widely popular. Easter Egg Hunts are carried in various countries, where both the kids and adults take part. Easter parades are carried out in selected countries, where people dress up like bunnies or eggs and take part in the fun-filled procession.

Easter Egg represents an empty tomb and is known to be a popular symbol of Easter Sunday. It signifies the circle of rebirth, and can be associated with the crucifixion and resurrection of Jesus Christ. It is believed that Christians of Mesopotamia used to stain the eggs in red to signify the “Blood of Christ”. In the ancient times, the eggs were dyed, but now, this practice has been prohibited, and instead, a chocolate in the shape of an egg is decorated, or jellybeans and chocolates are filled in plastic eggs. Easter Egg Hunt is carried out in multiple countries, and kids explore the farms in search of tasty egg-shaped chocolates.

Below we have mentioned some interesting facts about the festival Easter, which we doubt you knew or were even aware of! Read below to enlighten your knowledge:

1. What is the second Sunday of Easter called?

The Second Sunday of Easter since 2000 is also called Divine Mercy Sunday.

2. Why do we celebrate Easter with eggs?

Easter Egg represents an empty tomb and is known to be a popular symbol of Easter Sunday. It signifies the circle of rebirth, and can be associated with the crucifixion and resurrection of Jesus Christ.

3. Why is Easter so important?

Easter Sunday is the culmination of Holy Week. Easter commemorates Christ’s Resurrection. It is the most significant Christian holiday, and the one with the greatest joy celebrated.

4. What is the week after Easter called?

The Easter Octave is the eight-day (octave) duration of Eastertide that begins on Easter and ends on the following Sunday.

We hope that you have liked our article on Easter Sunday and found the details informative. We wish you a Happy Easter!